Sheryl Crow Uses One Square of Toilet Paper, How About You?

The United States makes up only 5% of the World’s population, yet we use about one-third of all its resources. Americans often think that we, as individuals, are too small to make a difference, but that is just not true. Small steps, when taken collectively have a huge impact.

I go through so much toilet paper (TP) it’s not even funny. You probably do too. Next time you go #2, count how many squares you use. You might be shocked. It makes sense, though, seeing as how it is one of the top selling retail items in the Western World. Worldwide consumption is 83 million roles which use 27,000 trees every single day!
In 2007, singer Sheryl Crow was made to be a laughing stock when, in an open letter on Huffington Post, she suggested a way to slow climate change was to use only one square of TP after going potty. Just one square! Can you imagine? She was definitely the butt of many jokes (insert drum machine here). Hell, I don’t remember this story when it came out, but would have probably been laughing alongside everyone else.
You can read Sheryl’s letter here. I wish she actually explained how to use just one square. There are several videos on YouTube that explain how to do it, I just can’t tell if they are serious or not. I use single ply TP, but the common theme of these videos is double ply, since it is more durable and has more absorbing power.
Here you go (let me know how this goes):
Yes, this sounds gross and disgusting, but consider that 70 to 75% of the world does not use toilet

paper at all! A few year ago I spent two weeks in Morocco, which is a Muslim country in Northern Africa. It was a bit of a culture shock for me the first time I used a Turkish toilet, not because I had to squat (something I’ve done several times as a backpacker), but because there was no TP or soap. You had to wipe with your left hand then wash it will cold water and no soap.  This seemed counter-intuitive to my perception of Muslims as being very clean people, but once I fully understood the culture it made more sense (left for the toilet, right for everything else, like shaking hands and handling food).

So, they begs the question, if we are expected to wipe our bottoms with our hands, why bother with the paper at all? Maybe it was intended to be a segue… a balance between the old way (no paper) and the new way (one square), which was probably perceived as more sanitary.
Here’s a challenge: the next time you make a doody, count how many squares you use. I’ve gotten it down to 6 single ply, which is about half where I was beforehand (or afterhand?).
I’m not saying you need to wipe with you hand, even though we (I don’t know that I can make this switch) are in the minority. What I am saying though, is see if you can cut your TP use in half. Sometimes just being mindful is all it takes. Think big in a small way. A few squares here and there might not seem like a lot, but if we all made the conscious effort to cut our TP use in half, we (as a collective) would save about 14,000 trees every single day.
Here are some benefits of using less TP: 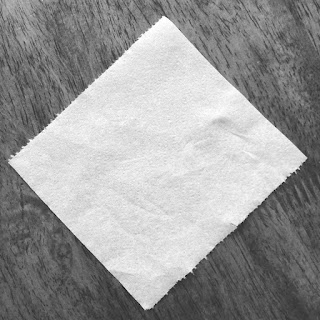 For more tips and tricks to reduce your footprint and live a zero waste lifestyle, please check out www.zerowasteguy.com