Where Zero Waste and Men’s Health Meet: A Shave-Free November

Men’s health is a big deal. On average, men live six years less than women. According to cancer.gov, for every 100 new cases of cancer in women, there are 125 cases in men. When I think of cancer awareness for men, two charities come to mind: Movember and No-Shave November. Although their messages vary slightly, they both encourage people (women can participate too) to go the entire month of November without shaving. 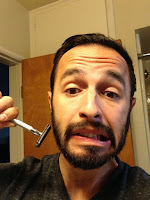 and rarely shave at all (except when my mom makes me… No, I’m not kidding), I thought this would be a no-brainer way to support the cause. Since I don’t shave it felt like I was already supporting the movement. As you can see from the picture with my razor, shaving is scary. I look different. I feel different. Bouncers do a double-take before letting me into their bar. After reflected on it, it occurred to me that if the intent of these movements is to get people out of their comfort zones, I too would have to get out of my comfort zone by shaving.

How does this relate to zero waste?
Shaving uses a lot of resources: razors, shaving cream and water. The Environmental Protection agency estimates that Americans toss two billion (2bn!) disposable razors annually. That is more than six per person, and let’s be real, little kids, hipstersand old people don’t shave.  Even taking an extra five minutes to shave while in the shower with a standard shower head uses more than 12 gallons of water. Shaving less dramatically reduces water consumption and saves waste. If those two reasons alone don’t convince you to shave less, this should: the less you shave the less razors (disposable or otherwise) you consume, which saves you money. Even if you use an electric razor, it will inevitably break. It will last longer if used less.
For more than 10 years I used a Gillette Mach3 Razor. I went online and bought a ton of refill blades. It made sense. I still have it, but don’t use it anymore because I use an old school handle that literally uses razor blades. A single blade, it works better than any razor I’ve ever used. Call me cheap (I prefer thrifty), I even sharpen the blade as it dulls to increase its life. The blades unfortunately come in tiny plastic package, but the blades are nothing but metal, which means that you can take them to a place that recycles metal since they are contamination free.
This month, think before you shave. Ask yourself, “can I go even one more day?”